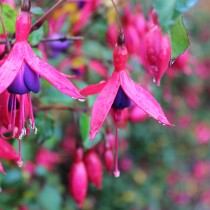 Clients including the Presbyterian Church in Ireland, Shambles Variety Market in Armagh, the Young Farmers Clubs’ of Ulster and Bangor Worldwide Missionary Convention feature throughout the calendar.

I had the privilege of meeting Maud Kells who was one of many international speakers that participated in the Bangor Worldwide Missionary Convention. Maud is a inspirational lady who, despite the horrific incident she endured earlier this year, has remained truly humble and forgiving of those who shot her when she was serving in the Democratic Republic of Congo.

In April this year, the official opening was held of Rathfriland Young Farmer’s Club’s new hall on Downpatrick Street. As Club President, it was my privilege to be MC on the day and welcome Noel Lavery, DARD’s Permanent Secretary as our special guest along with over 200 invited guests. The hall is now in use not just by the club but also organisations and groups within the local community and it has been great to see a new part of my home town developed with a new lease of life brought to a once derelict piece of land.

Speaking of my home town, one of the best features about living in Rathfriland is the quick access to the Mourne Mountains. I’ve grown up with them towering in the distance and can understand why CS Lewis found them inspirational in his writing of the Narnia stories.

The Mountains of Mourne feature heavily in this year’s calendar as the opening month sees a frosty scene taken at Spelga Dam. The reservoir was built in the 1950s and currently supplies the Portadown and Banbridge areas with water.

Slieve Donard, the highest of the Mountain peaks, features in May to mark the anniversary of the Irish Open golf tournament that was held this year at the Royal County Down Golf Club. This was an historic day as golf stars flooded the seaside town of Newcastle – true to form, our weather was welcoming and a little bit wet!

A countryside drive through the Mournes is captured in the month of July, as curious cattle came to see what my camera and I were doing the other side of one of the infamous and uniquely built stone walls.

Castle Ward, the National Trust property on the shores of Strangford Lough provided the pretty fuchsia plants that adorn the cover page. The house itself is also included under November’s page.

Many will remember October 2015 as being one full of stunning blue skies and I managed to capture a completely blue sky in a barley field that my cousin Warren was harvesting. A growing field of my brother Trevor’s potatoes are featured in the month of June.

The calendar is completed with a holiday snap I took in the beautiful city of Paris. Our thoughts and prayers will be with those families who lost loved ones in last month’s terrorist attacks and who will have an empty chair at the Christmas table this year.

To all my clients, media colleagues and suppliers, I would like to thank you for your support this year, and wish you all a very happy Christmas with every best wish for 2016.