Rebecca McConnell established Purple Rain in the spring of 2011 as a Public Relations consultancy. To find out why she called it Purple Rain, you can read the blog post here. 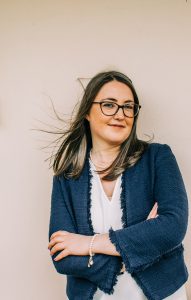 An Economics graduate of Queens University Belfast, Rebecca is a full member of the Chartered Institute of Public Relations. She has over fifteen years experience working in the Communications industry in Northern Ireland.

Rebecca worked on a range of public and private sector clients in her former employment at ASG PR (Anderson Spratt Group) and The PR Agency as well as in-house roles at the Presbyterian Church in Ireland and the Youth Justice Agency.

Feel free to get in touch to arrange a consultancy meeting to discuss your Public Relations needs. Call Rebecca on 077 2996 5231 or email rebecca@purple-rain.co.uk.
Get In Touch
Celebrating Courage – and a decade of Purple Rain
February 18, 2021