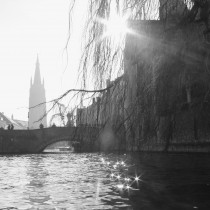 I enjoyed a weekend break to Belgium recently. When Great Britain’s victorious Davis Cup team won the final in November 2015, I liked the tweets players and tennis journalists were posting of Ghent, so it was first on the list. Viator, a local touring company, were offering a day trip from the capital Brussels out to Ghent and Bruges, so I booked my brother and I in for the Saturday coach tour.

Both cities are very picturesque with cobbled streets, canals filled with tourists on boats taking in the scenic views of medieval guild houses and imposing but beautiful cathedrals. The architecture reflects their hey day in the middle ages as prosperous cities and trading centres.

We took our tour guide Jan’s recommendation of a boat trip around Bruges, often referred to as ‘The Venice of the North’. It is the best way to see the city and get your bearings. About 30 of us packed into a low boat meaning we were only inches away from the water. On some of the bridges we went under, you could actually touch the ancient bricks above your head – and I’m not the tallest of people!

The sun was out and bursting through the trees and buildings that lined the canal. In the distance was the Onze Lieve Vrouwekerk church spire and a quaint bridge and I knew it had the makings of a nice picture, my only problem was the angle I was going to get sitting at the back of the boat. There were a line of Spaniards in front of me, who were at one point literally rocking the boat, and they would be in the shot if I wanted to take it head on.

However, our boat was to come back on the route so, as we turned the corner, I managed to get a small window of opportunity to take the shot. I only got two takes at it but I am pleased with the result, the header for this blog. I managed to get a little something special in my shot – some stars! The composition was to my liking but the stars twinkling on the water add a little, je ne sais quoi, as they say in parts of Belgium (French is spoken as well as Flemish, a form of Dutch).

Technically speaking, the star sparkles, sometimes called star bursts, are a function of the physical shape that the iris in the camera lens makes as it shoots looking into the sun. The smaller you set your aperture, the more pronounced the star sparkle is. My aperture for this shot was f16 with a speed of 1/80 and because it was a clear day, an ISO 100.

I hope you enjoy these few pics of Bruges and perhaps you will get the chance to visit there someday. To help take you there virtually, here is a summary of the tour as told by the senses:

The sound of Bruges was a host of different languages across the Burg (town square) and the click clack of horse hooves on cobbles as they transported delighted tourists around the city. The touch was of delicate white lace, once a main industry in the Flanders area of Belgium. The smell wafting through the spring air was warm waffles coated in Chantilly cream. The taste was the sweetness of Belgian chocolate washed down by a cool, crisp bier.

It’s fair to say that I would indeed recommend a trip to Bruges! Goedenacht (goodnight in Flemish)!