A decade in PR 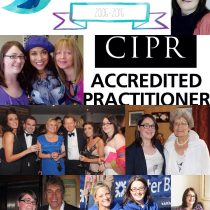 Ten years ago, I went to Paris for the first time. As well as a holiday, it was time between changing jobs and moving into a new career. I entered the PR world in June 2006 following a passion I had for writing and photography and a voluntary role that gave me a taste for the profession. I was nervous as to how it would all go…

Since then, there has been hundreds, perhaps thousands, of emails and phone calls. There’s been brain storms and reading lots of newspapers, drafting and re-drafting press releases and feature stories, fuelled by many cups of tea and cake where necessary. I’ve directed photography shoots, been part of event management teams, co-ordinated video blogs, set up broadcast interviews on TV and radio. As my experience grew, I was brought on board crisis management teams and given more responsibility for client accounts.

In the course of my duties, I’ve met some famous people and had my photo taken with a few including Myleene Klass, John Inverdale (who I got to quiz on what the top tennis stars are really like), Dragon Den’s James Caan and DR Congo Missionary Maud Kells. There was also that day in Bangor where I worked in the same room as Eddie Irvine and got to interview Mary Peters (take note BBC and when Sue Barker retires, give me a call).

Then, half way through my decade, I went freelance, establishing Purple Rain PR. I’m still on the journey of self employment which has its own set of challenges and rewards. I’ve had the flexibility of volunteering my services for free at the World Police & Fire Games in 2013 and at the Giro d’Italia in 2014 however the deadline of filling out a tax return remains harder to deal with than deadlines for newspaper copy!

I would like to take this opportunity to pay thanks to those who have taught me and encouraged me along the way, particularly Kate Thompson, Sasha McKnight, Russell Lever, Emma McArdle, Victoria Clarke, George Lowry, Stephen Lynas, James McCormick, Sarah Harding and Mark Thompson.

I also had the privilege of working with the late John Harrison, whose words of wisdom for photography I still refer to and use today.

I am also grateful to my friends and family for their support throughout the many different roles I’ve had over the years.

To celebrate my anniversary and Twitter’s decade of existence, it felt appropriate to tweet using emojis – purely a copy of the style of tweet Andy Murray used to celebrate his wedding day with Kim Sears.

Here is a gallery of some of the highlights of my decade in PR!