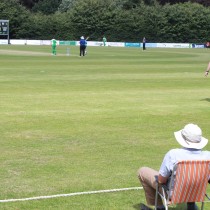 My first day of volunteering action on the WPFG Social Media team, known in the Twitter trade as #wpfgsocialteam, took me to Shaw’s Bridge on the outskirts of Belfast, where the PSNI team where to face Sri Lanka Customs Veterans in their 2020 cricket match. An avid tennis fan, I confess to not watching or understanding cricket all that terribly well. However, with the assistance of my fellow and might I add friendly volunteers, I was able to follow and enjoy the afternoon match in the welcome sunshine.

PSNI won the toss and elected to bat, an unusual move, so I am told. There was great commoraderie amongst the teams with each team communicating to their teammates and receiving plenty of applause from assembled family, friends and spectators.

With 2020 cricket, each team plays 20 overs making it a more compact game compared to traditional cricket matches. Thankfully the team kits weren’t all white either so you could distinguish the teams. The Sri Lankan’s played in bright blue outfits whilst the home team were in green with white trim.

With the grounds so close to the River Lagan, there were a few cries of “new ball” despite volunteers on the Field of play team trying to rescue the ball. PSNI had a good start at the batting and got 155 runs for 3 wickets. Then it was time to break as the Sri Lankan’s prepared to come out and bat their turn.

Over lunch I got chatting to fellow volunteer Brian Hennessy, a retired photographer who has given up his time to capture the sporting action at the Belfast Games. “I’m not all that into sports but I wanted to be part of the Games especially when they are at home this year. I got tickets to the opening ceremony last night and it was such a Carnival atmosphere, it was fantastic. There was no animosity with competitors everyone was very friendly and the Italian team came out holding one of their competitors afloat like he was superman. I have shifts every day and am looking forward to seeing the SWAT tomorrow and action at the PEC next week.”

After play resumed again, the sun moved behind clouds offering slightly cooler playing conditions. Sri Lanka veterans, an over 50s team, began well gaining 95 runs for 5 with 15 overs. However, when it came to the end of their overs, they couldn’t match the PSNIs 155 for 3 and so PSNI won the match, their second in a row at WPFG.

After the match PSNI captain said, “What a win! We always come into matches hoping to win and with cricket being part of WPFG for the first time, we are here to go for gold! We’ve two matches played and two wins and that gives us a lot of confidence with three more matches to go. Ideally we’d love to be playing the Australian team for gold. We’ll just have to see!”

Sri Lanka  Veterans captain Dumin weerakkody said, “The cricket competition has been Well organised, the ground conditions are good. The PSNI were a very friendly team, they played an excellent match. We hope to do better in our future matches, this was only our first one.”

Dumin also had high praise for the opening ceremony last night saying it was a “beautiful event”, something they were all proud to take part in.

Carrying the bats up from the grounds to the clubhouse, wicket keeper Andy Dodd from the PSNI team said, “We are really pleased with another win today. We got great weather compared to yesterday when we had to wait hours to get our match started with all the rain. It’s great to see all the volunteers giving of their time to help out, it’s been a great event so far.”

Bryan Record has come all the way from Essex in England to be a part of the WPFG in Belfast:  “Volunteering in Belfast at the WPFG is my way of saying thanks to those people in NI who came over to help out at the Olympics last year. I’ve had to and not minded paying for my own fights and hotel accommodation and have taken two weeks off work so I can be a games ambassador here.

“Last year I volunteered at the Olympics White water canoeing event and whilst it is generally a minority sport, when GB won gold and silver the 12,000 people there supporting the teams were so thrilled to see home wins, the place just erupted! It was a Wonderful atmosphere. You can’t describe it, only to say it was the best two weeks of my life.

“I’m working every day except weekends which gives me time to see a few sights. I’m attending the memorial service on Sunday and hope to get up to see the Giants causeway.”

This trip to Belfast marks many of the Sri Lankan’s first time in Northern Ireland and whilst they are finished playing for the day and could go sight seeing, they take their cricket seriously enough to go and cheer on their other team. The Sri Lankan Lions were taking on Australia at the Stormont pavilion.

PSNI will play the younger Sri Lankan team, the Lions, on Sunday 4th August at 12 noon at Shaw’s Bridge. They will also play NYPD on Monday at 3pm also at Shaw’s Bridge and their final match will be against Australian Fire Brigade on Tuesday 6th, 3pm at Stormont. Matches are open to the public to attend and are free.

There are 6 teams in the 2020 cricket competition and the winners from the league matches, whoever they may be, will receive gold medals come Tuesday.