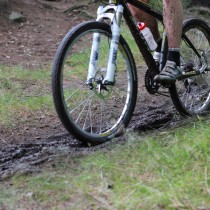 Day two of my volunteering with #wpfgmediateam and I found myself at a familiar venue but covering yet another unfamiliar sport – Cross country Mountain biking at Kilbroney Park in Rostrevor. A native of South Down, I have long adored the beautiful views available in the forest park but the competitors today will have been more focused on the task in hand – a rough course with steep inclines and gold medals up for grabs.

The track for Cross Country was approximately 4km long and included natural technical single-track, fire road climbs and some fast trail centre single-track. It wasn’t until the WPFG finished that I got an appreciation of the toughness of the course, taking a walk round and seeing for myself the hills, the bridges and small rivers they had to negotiate all on two wheels.

The cross country competition is spilt into age groups allowing competitors as old as 65 to take part as well as as young as 18. The atmosphere was buzzing and the music was bumping as the competitors raced off representing Canada, USA, Spain, Italy, Czech Republic, Sweden, Republic of Ireland, NI and even Mongolia!

Dromore Cycling Club did a great job alongside WPFG volunteering keeping the times and calling out to competitors how many laps they had left. Most of the male classes completed 6 laps whilst the ladies completed 4.

NI Secretary of State Teresa Villiers arrived to catch some of the action and then was joined by WPFG Mascot, Emergency Eddie who posed happily with many of the family and spectators.

Supporting their men were Ninni and Jenny all the way from Sweden. Their husbands work in the Fire Service in Sweden and this is the fourth Games they have taken part in. Jenny said, “The Games are great, its such a lovely venue here in Kilbroney, we are staying in Kilkeel and getting to see the sights. We thought the opening ceremony in Belfast was the best we have seen, such a great atmosphere.” Jenny’ son baby Teo, only 8 months old was there too to support his Dad, a gold medallist in the Barcelona WPFG , the only other Games to have been hosted in Europe.

Brothers Dylan (10) and Alfie (8) Lewis came from County Tyrone to take part in the kids open races that were running alongside the WPFG races on a separate course. There were races for under 6, under 8s, under 10s and under 12s. Sponsor Chain Reaction Cycles also ran races for under 14s, under 16s and four Senior classes, these ran after the WPFG medal ceremony.

There were great cheers of support for all medal winners at the podium. Every medallist enjoyed celebrating their success with plenty of friendly hugs and many many photographs taken. PSNI celebrated home success with gold and silver medals in the both the men’s and women’s races.

The female PSNI silver and gold medal winner was visibly thrilled to have won in her home Games. “I am ecstatic. It was such a tough course to complete. I fell off one of the bridges and came off my bike, i think i have sprained my wrist. Unfortunately i will not now able to complete in the triathlon tomorrow, but as for the next Games, yes, Ill be there! Fairfax here we come!!”

Belfast born Keith Leinster, here representing Police Scotland, was happy with his bronze medal and praised the organisers for delivering on a great course. “They weren’t afraid to make it good and technical which suited my kind of riding. After a slow start, I managed to catch a few people and claw my way back.” Keith also caught up with some cyclists he used to train with that have now joined the emergency services.

Canadian Gold medallist (50-54 category) Ron, who couldn’t compete in the NYC Games because Hurricane Irene meant the mountain biking competitions there had to be cancelled said, “I’m glad that is over! It was one of THE hardest courses I have done in a bike race. I was quite pleased to have won today! it’s been a great event, fantastic atmosphere and competitor spirit.”

With all the cross country races completed today, the cycling action tomorrow will focus on downhill racing on the newly opened course at Kilbroney. Some WPFG competitors were practising the course today getting a feel for what they have to do tomorrow. Having had a sneaky peak at part of the course, all I can say is, if you want to see some spectacular sporting action on two wheels, get down to Kilbroney Park tomorrow!