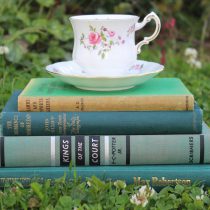 Over the years I have bought and read many tennis books, including my favourite type – autobiographies. As a tennis fan and a book addict, it is the perfect combination. Reading first hand from the players whose shots I admired on court helped me to get a fuller story of them as a person, behind the tennis racket.

I’ve amassed quite a collection that I have been tidying up during lockdown. With no tennis being played on the green grass of Wimbledon this year, I thought I would share some of my favourite reads and what I learned from them.

It is important to remember that tennis players, whilst gifting with court movement, tactics and groundstrokes, also received some help with writing up their memoirs. Maybe someday, I will help to tell the story of a Wimbledon winner!

The book that inspired me into tennis
Monica Seles From fear to victory
Best Wimbledon performance: Runner Up 1992

This was my first tennis autobiography, read in school as part of an English project and it made me a tennis fan ever since I finished that library copy as a teenager. Monica’s story captivated me. Born in Yugoslavia, her dad drew cartoons onto tennis balls as she hit them two hands on both sides. She catapulted to victory winning eight Grand Slams before a cruel turn of events. Her rival on the court, Steffi Graf had a jealous fan who didn’t like how Monica was defeating his idol, so he stabbed her on a court during a tennis match in Hamburg in April 1993. It took its toll mentally and emotionally on Monica who, like so many tennis players, had a whirlwind in teenage years to make it to the top. From reading this book, I was a Seles fan and a tennis fan.

She never got to lift the Venus Rosewater dish at Wimbledon, the closest she came was in 1992 when Graf beat her in the final. It is worth mentioning she did beat Martina Navratilova in the semis that year! Unfortunately her style of tennis was not best suited to grass but her return to the game in 1995 made her a very popular player at SW19 right up until her retirement in 2008.

Jelena Dokic scored one of Wimbledon’s biggest upsets of all time when in 1999 when she beat former champion and the then World No.1, Martina Hingis, in the first round of Wimbledon 6-2, 6-0. I remember watching this match amazed and in awe of the way Jelena played. Her run, as a qualifier might I add, lasted until the quarterfinal but that first round encounter is probably her most recalled match.

In her book, Jelena reveals the dark and dismal reality of that tournament, how her father didn’t even congratulate her after the famous win, and how the press started to focus on his as tennis’ “dad from hell”. Later in the tournament, he would make her stand for hours after long matches as punishment. He also hit her and his anger led to outbursts with hotel staff and journalists that drew negative media attention.

I played my family out of poverty, but it wasn’t enough for him. I couldn’t draw a single word of praise from him, even when I reached world No. 4. Nothing was ever good enough in his eyes. As much as he helped propel me to tremendous tennis heights, his destructive ways eventually crushed my spirit and almost destroyed me…

The heart breaking to read accounts of the verbal and physical abuse by her father is softened by the wonderful relationship she develops and maintains with her brother throughout and the love of her boyfriend, Tin, that brings her through some tough times. Without spoiling it, readers are in for a happy ending.

The book that helped me understand the cost of tennis on a player’s body
Andre Agassi Open
Best Wimbledon performance: Winner 1992

Watching tennis matches, especially long duels, requires little of a tennis fan and we so often forget that afterwards, the player has to recover physically and mentally as well as face the press. Reading Agassi’s autobiography gave me the best insight into the agony players face and the damage on their bodies. His description of his second round US Open 2006 match against Marcos Baghdatis which went five sets and which the American won 6-4, 6-4, 3-6, 5-7, 7-5 lasting four hours, brought home the cost of professional tennis on a player’s body.

The book was famous for Agassi’s revelation of drug usage but it wasn’t the most striking thing for me reading as a tennis fan – he admitted he didn’t even like the sport! Agassi was one of only a handful of male players to win all Slams at least once. He beat Goran Ivanisevic in the 1992 final and celebrated at the Champions Ball alongside Steffi Graf who he later married in October 2001. Here is how he described their wedding day:

I love watching Stefanie with my mother. The two shy women in my life. Stephanie often brings her a couple of new jigsaw puzzles. And I adore Stephanie’s mother, Heidi. She looks like Stefanie, so she had me at guten tag. Stephanie and I, barefoot and wearing jeans, stand before the judge in the courtyard. For wedding bands we use twists of old raffia Stephanie found in a drawer – the same stuff I used to decorate her first birthday card. Neither of us notices the coincidence until later.

The book that told the story of the birth of the WTA
Julie Heldman Driven: A Daughter’s Odyssey
Best Wimbledon performance: Quarter finalist 1969 & 1974

Julie’s name might not be the most famous in the tennis world but her story reveals some very interesting insights into life with her mother, Gladys Heldman. Gladys was the editor and publisher of World Tennis magazine and was an influential person in the game through the 1960s and 1970s. Alongside the well known Billie Jean King, they collaborated to form the beginnings of the WTA (Women’s Tennis Association) at an exciting time for tennis in the pro era, known as the Open era.

Being open and honest about the tricky relationship she had with her mother, Julie doesn’t hold back. The chapters are short and witty and you can see she inherited her mother’s literary talents. Her description of life on the tour and, like Agassi, the toll it takes on the body, is a helpful one and it is not your typical tennis autobiography. She also opens up about her mental health struggles and so the book leaves a lasting impression.

The book that gave me an appreciation of life, not just tennis
Arthur Ashe Days of Grace
Best Wimbledon performance: Winner 1975

Arthur Ashe’s autobiography is probably my favourite read so far. Of all the auto bios I have, it reveals the most about life and goes beyond simply a tennis book. Arthur was an intelligent, humble and selfless man with an incredible story. The book focused less on the tennis than I was expecting but not in a disappointing way. He was a champion on the court winning Wimbledon in 1975 and the US Open, but I think he was perhaps a bigger champion off it.

He contracted AIDS after a blood transfusion following heart bypass surgery and had to deal with the stigma that accompanied AIDS on top of the racism that he also encountered. In his last chapter, he wrote specifically to his daughter, Camera, who was only 6 when he passed away in 1993. He had some wise advice for her in his aptly titled book ‘Days of grace’, here is a flavour of what he wrote:

As of now, you surely do not know exactly what I mean when I tell you about racial discrimination. If I could present you with one gift, it would be a life free of that burden. I can’t, and you must learn to deal with it and remain happy and good.