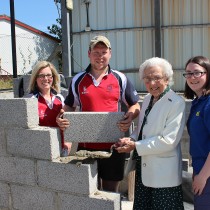 Today, I had a photocall in the diary. That’s nothing new in the life of a PR professional but today was a very special photocall. For once, rather than directing a photographer on what photos to take for a client or, as most recently, taking the pictures for clients, I got to be in front of the camera and in the photograph.

My local Young Farmer’s Club, Rathfriland, is in the middle of building a new 520sq m hall and we marked the main start of the brick laying work with a photocall. Milestones like these are meant to be celebrated and it was fitting that our special guest was Mrs Trimble, who for 53 years served as the dedicated caretaker of the club’s hall on Newry Street.

But I also had a special job to do. Transport the special guest to the venue of the photocall. So I went to pick up Mrs Trimble at her house on Newry Street, just yards from where the old club hall used to stand but which has since been demolished. I felt like I was transporting royalty about. She was smartly dressed for the occasion, even on one of the hottest days of the year.

We drove the short distance to the new building site, on Downpatrick Street. Mrs T, as we affectionately call her, was greeted with a hug by one of the club trustees, a sign of their friendship, many many years old. She was touched that the club still thought of her and had asked her to be a part of the occasion.

After the photographs were taken with the building foreman, club trustees and club members, lo and behold Mrs Trimble reached into her navy handbag and pulled out a speech written especially for the occasion.

So, standing in the midst of the new club hall with its giant red steel structures awaiting brickwork, Mrs Trimble delivered her address with poise and most of all, loving affection, for the organisation that was part of her life for so long. With her words, as always, she encouraged us. Encouraged the younger generation in their vision for the future, and reminded us that it all takes hard work. “Keep it going, look after it and prove what great organisation YFC is”.

In her speech Mrs Trimble, in her 90s, also remembered the many that wouldn’t see the new hall but had so much involvement in the old hall. For me and my sister, it was an emotional speech because our father, who was at the last main club event held in the old club hall in February 2013, is sadly not here to witness the new build for the organisation he was part of in his younger days.

It was lovely to be part of the photocall in my role as club Vice- President and I counted it a privilege, to taxi Mrs Trimble safely back to her home as the builders continued their toil under the hot July sun.