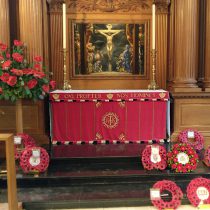 After a visit to St Bride’s Church in London for the 70th anniversary of the Chartered Institute of Public Relations (CIPR), Rebecca reflects on the need to remember journalists who have died in war zones bringing us the news.

You’re watching the news with a cuppa and the pictures that you see on TV aren’t pleasant. Scenes of conflict, war and shattered buildings. The description by the journalist tells a harrowing story. More deaths, more loss, civilians killed, there seems no end to the violence.

Perhaps you switch channels or turn off the TV, your mind moves to other matters. But for that journalist and their supporting camera crew, they remain in that environment. They remain in dangerous war zones so that they can give another update the next day and the next. Their lives are at risk and we must confess that it is something we take for granted.

For many years, a church in the City of London has held a remembrance service specifically to commemorate all those in the media industry whose mission to bring us the news faces peril and uncertainty and sometimes, tragically, demands the ultimate price.

Tucked in behind the busy thoroughfare that is Fleet Street, St Bride’s is often referred to as the Journalist’s Church and the ‘spiritual home of journalists throughout the world’.

Fleet Street became synonymous with the press, journalism and national newspapers as it was the home of printing presses for over five hundred years. The presses may have moved out of the city as digital media propels in importance, yet St Bride’s remains a place for journalists to worship, to get married in, as Robert Murdoch did in 2016, but it is also a place to remember their fallen colleagues.

Earlier this year, in April, when freelance journalist Lyra McKee was shot dead on the streets of Londonderry , a vigil service was held for her in St Bride’s attended by around 60 people. Twenty-nine candles were lit, one for each year of her short life.

Back in October 2003, a special service was held to commemorate the journalists and cameramen who were killed covering the war in Iraq and a memorial was unveiled by Sir Trevor McDonald.

The services are not only an opportunity for those in the industry to come together, but also their families, who also bear the brunt of the cost of news.

Addressing the congregation at the 2010 Annual Service of Commemoration, Marie Colvin, Foreign Correspondent with the Sunday Times said,

“In an age of 24/7 rolling news, blogs and twitters, we are on constant call wherever we are. But war reporting is still essentially the same – someone has to go there and see what is happening. You can’t get that information without going to places where people are being shot at, and others are shooting at you. The real difficulty is having enough faith in humanity to believe that enough people, be they government, military or the man on the street, will care when your file reaches the printed page, the website or the TV screen.”

Marie died on 22 February 2012 when an artillery shell fired by the forces of the Syrian president, Bashar al-Assad, ripped through the roof of the house where she was staying, crushing her under the rubble.
The Archbishop of Canterbury, The Rt Hon Justin Welby spoke these words at the 2014 Commemoration Service:

“The power of the communication demands that the communicator puts themselves in the place where they are a witness. Witnessing is profoundly costly.
“So it is right and essential that in this darkening world we give thanks for those who witness, who light the lamp of truth where it is being snuffed out by so many. Not only by savage evil, by those who sell arms and convey lies; but by those who are indifferent and forgetful.
“It is right that the value of our common humanity is brought home to us by those who go to places that everyone else is leaving.

“To witness is to tell the truth. And the more horrific the circumstances, the more needful, the more precious, the more costly is the truth. But we believe, as Jesus put it, the truth is not cheap. As he said, the truth sets us free.”

Tonight, as you watch the news or listen online, take time to remember with thanks those journalists who are working in hostile environments and pray for those families that have lost loved ones who died whilst trying to project the truth.

We will remember them.