Behind the scenes at Wimbledon 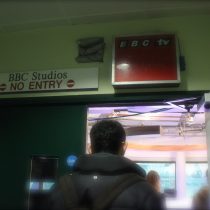 Those that know me will know that I like my tennis and I love Wimbledon. I have been fortunate enough over the years to win tickets in the public ballot and make the trip to the hallowed grounds of London SW19. Whilst I am not going over to watch the tennis live this summer, I was able to visit earlier this year.

Back in February, whilst on a business trip to London, I managed to fit in a tour of the grounds at the All England Club and a look around their award winning museum.

Greeted by our knowledgeable tour guide, we started beside the sculpture of Fred Perry, the British winner in 1934, 1935 and 1936. We went under the Centre Court structure where the hall of fame brings up each winner since the tournament began in 1877, and ascended the steps out onto the most famous tennis court in the world. Having had various seats on Centre before, I was familiar with the view but even without any prospect of play nor even a net up, the history and the prestige of the stadium whisper ‘this is a special tennis court’.

We then made our way to the Millennium Centre which is where the players get changed, get interviewed by the media post-match, eat and even partake in the odd ice bath!

Unlike the Roland Garros tour, we did not get into the players’ locker rooms but we did get to sit in the interview chair in the main press room and the tour guide kindly and patiently took our photos so we all had a memento of the occasion. We also got access into Studio 9 where Sue Barker presents the daily BBC coverage from.

She has a great view over the grounds and on the day I was there, Court One was surrounded by cranes and building work as they prepare to put a retractable roof that will be finished by the 2019 tournament. After travelling across from Northern Ireland to only see 10 minutes of play and then a lot of rain, I am very glad to see they are investing in another roof for their second show court!

We were also taken up onto the rooftop of the broadcast centre, where we could see a great view of all the building work that will also include a new hospitality area and tunnel for players to use to get between courts.

Working in PR you become familiar with organising events and I have complete admiration for the Wimbledon team that produce the tournament each summer – they have to co-ordinate 674 matches in 16 different competitions within the space of 13 days and just 13 acres!

Of course there is a large team in place that work to ensure this all happens smoothly and we were taken into one of the hubs where TV screens monitor the goings on across the grounds as well as online ensuring there are no cyber attacks when visits to their official website are at their annual peak. The Club work closely alongside IBM on internet safety as well as all the match statistics that are provided to journalists and TV producers.

One area I thought we would gain access to but we were denied was that of the famous Clubhouse. As well as hosting the two week Grand Slam each July, Wimbledon also runs as a club 365 days a year so that is why the tour does not cover the building. The closest we got was in the Millennium Building, we caught a peek in through the windows to the corridor that the tennis stars walk on finals day. The steward who was helping the tour guide ensure none of us got lost (or wandered off) was able to fill me in on how much it costs for annual membership. I can’t reveal publicly the price but it is not as much as you would expect! The hard thing is to get nominated by two members. The other alternative way to join is to win the tournament. There is no easy way to be a member of this exclusive club!

As the tour finished, we were allowed to pursue the Museum at our leisure. I had a plane to catch so I didn’t get to spend as much time as I wanted to but there is plenty to see, read and explore.

Lines from Rudyard Kipling’s poem If that face players as they descend the stairs from the locker rooms to the Centre Court are also etched inside the Museum and that is where the coveted men and women’s trophies are also kept.

The trophies are behind a glass case but there is the opportunity to lift the weight of each trophy to try them out for size! The Venus Rosewater Dish weighs 2.3kg whilst the men’s silver gilt cup is heavier at 3.5kg. You can see the development of rackets throughout the years and all sorts of memorabilia including posters, magazine covers and stickers.
An array of vintage tennis fashion including some of Teddy Tinling’s dresses are on display beside outfits of current pro players including Rafa Nadal, Andy Murray and Serena Williams.

So, if you were disappointed in not getting tickets this year, then I would recommend the next time you are in London, book in for the tour and visit the museum. Walk around the grounds and savour the history and grandeur of the home of tennis – Wimbledon!