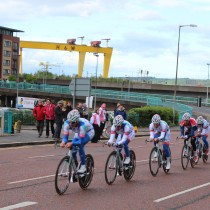 Did you go and watch the Giro when it was in town? I hope you did. Maybe you managed to get elusive tickets to the team presentation or wore pink to work or were lucky enough to see the peloton pass through your local village.

The weather wasn’t ideal for the riders but the outdoor elements are always going to be out of our control.

As Stephen Kruijswijk, a member of the Belkin ProCycling team tweeted yesterday (@s_kruijswijk) “Stage had everything, rain, wind, sun, crashes but survived tour of Ireland, great start and atmosphere. Now ready for the #giro.”

It is a rest day for the cyclists but as the cycling show moves base from Ireland to Italy, there are a lot of logistics to once again organise and get in place.

Italy RCS Sports colleagues Valentina, Matteo and Stefano that I met whilst volunteering last week at the Giro Big Start, will today be in the press centre in Bari, meeting all the Italian press and the rest of the world’s media.  They will be clarifying their details and handing out new car stickers to those who have been accredited to report and cover the rest of the Giro d’Italia’s 21 stages.

My volunteer experience was slightly different to my time at the World Police and Fire Games last summer. At the Giro, I assisted the press team rather than being out at the events reporting and live blogging on what was happening at the WPFG. Having said that, it was a treat for me to be based at the headquarters of the main event organisers, RCS Sports, and witness the behind the scenes activity, with all the hustle, bustle and excitement of an international sports event.

The cycling teams, event organisers, media and entourage may have left Northern Ireland to continue the arduous Giro competition on Italian soil, however the legacy begins on our home turf.

If in years to come someone will compete in or even win the Giro having saw it as a child, on top of their daddy’s shoulders, then they will have #Girostart14 to thank in part. Whilst I have to be real and accept that Wimbledon will never go on tour, Northern Ireland has to look at the strengths and opportunities out there and hosting international cycling tours and golf tournaments is an area we can really strengthen in the future.

After my second volunteer shift on Friday I got the opportunity to see the first stage on the streets of Belfast. Watching the riders come in at the City Hall on Friday night, I felt a lump in my throat. I know I’m not cycling’s biggest fan but to see a cycling equivalent of a Grand Slam in our wee Country, well, it was just something very special. To see everyone embrace the pink, making more of an effort than what happens in Italy according to Eurosport, demonstrates just what we can do when we back something, together.

Here are some pictures from the RCS Sports base at the Waterfront Hall and Friday night’s team time trial. Arrivederci Giro! Mille Grazie!